The Draw tool works in several different ways depending on the the subtool that is selected. 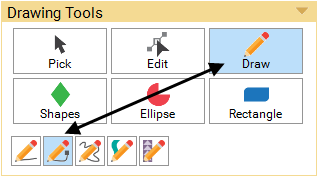 The Bezier Curve subtool draws curves one segment at a time.

To Draw a Bezier Curve

The Bezier curve draws to its own restrictions, which may not be what you had envisioned your curve to look like. This is where you would use the Edit tool to make adjustments to the curve.

Hold the keyboard Ctrl key while drawing your Bezier curve. The Ctrl key will change the curve into a line segment.